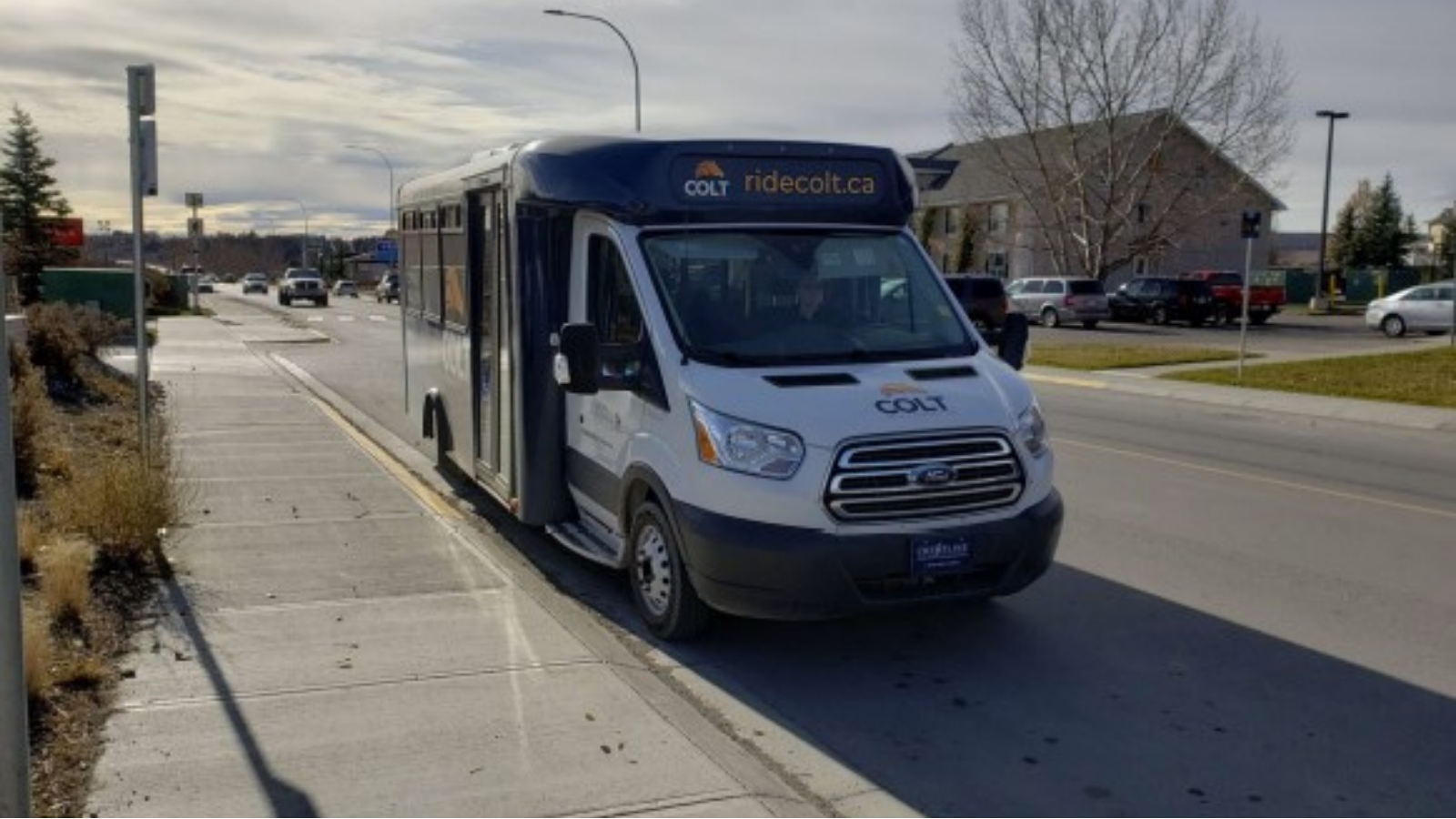 This article was originally posted on the Globe and Mail on May 6, 2021.
‍

When Roba Farah immigrated from Syria to the Alberta town of Cochrane with her husband and three children in 2016, there were few transportation options available to their young family. With two special-needs children, they frequently had to ask for rides from a friend.
‍

That changed in 2019, when the town of 30,000, about a half-hour west of Calgary, introduced its first public transit system: COLT (short for Cochrane On-demand Local Transit). Now, with a modern on-demand transit system, Farah can book rides and take her two sons, who have autism spectrum disorder, to daily therapeutic activities at the town’s sport centre.
‍

Unlike traditional fixed-route transit, an on-demand system enables riders to request that a bus come to the stop closest to them when they need it and take them to a stop nearest to where they want to go. The ability to put public transit within reach of smaller communities is one of several advantages, transit experts say.
‍

Cochrane decided in 2011 that it would like to create a public transit system, but for years balked at the estimated $1.5-million annual cost, said Devin LaFleche, the town’s transit co-ordinator. That changed when Southland Transportation, a local transit contractor, suggested an on-demand system that could deliver comparable service for an estimated $600,000 a year. Council approved, and COLT pranced out of the stable in October, 2019.
‍

“The argument in Cochrane was always, ‘Is anybody going to use transit?’” LaFleche said. Authorities were pleased with ridership that had reached 180 to 200 trips a day before the pandemic hit, lowering daily trip volumes to around 100 now. Fares are set at $2.50 per ride; as with most transit systems, public transit is subsidized.
‍

In larger cities, transit planners hope the enhanced convenience and flexibility that comes with on-demand — which academics call demand-responsive transit (DRT) — will encourage more commuters to abandon the cars that are choking our roads.
‍

“There’s a reason why people aren’t using public transit enough,” says Remi Desa, chief executive officer of Pantonium Inc., a Toronto-based provider of DRT technology — specifically the inconvenience of not being able to travel quickly to a precise location, or very near one, at a given time. “If we can shift people out of single-occupancy vehicles, that is huge.”
‍

The concept of on-demand transit has been around for decades, says Dan Finley, vice-president of corporate services for Pacific Western Transportation, a Calgary-based firm that provides motorcoach and transit services across Canada. “It’s just dial-a-ride with a stronger technology,” Finley says.
‍

DRT found new life with the arrival of the smartphone, the same tool that lets you book an Uber or Lyft car share from virtually anywhere, says Matti Siemiatycki, associate professor in the University of Toronto’s department of geography and planning.
‍

“The rise of cellphones and data has been the starting gun,” Siemiatycki says.
‍

Now, companies like Pantonium, Waterloo, Ont.-based RideCo and New York based Via Transportation Inc. are providing the powerful technology that enables transit companies to offer DRT. Typically, a DRT user books a transit request through a smartphone app. A central database finds the vehicle that can provide the requested ride most efficiently and sends updated route instructions to a mobile device the driver uses for navigation.
‍

The cost savings come from sending buses to the people who need them and avoiding endless trips past vacant bus stops, Desa says. “Every time I go to a bus stop, it’s a cost,” Desa says.
‍

By eliminating unnecessary stops, “I can have fewer buses on the road” — typically one-third to half fewer.
‍

The term DRT is used for a spectrum of systems that vary from “micro-transit” — essentially door-to-door ride-sharing services — to “macro” systems, which deliver passengers to the closest transit stop. Micro service can be very costly, says Willem Klumpenhouwer, a postdoctoral fellow at the University of Toronto’s Transit Analytics Lab who recently wrote a report on the state of DRT in Canada. The average cost per ride in some U.S. cities was as high as $30 door-to-door, while less customized macro systems came much closer to the average cost of fixed transit, around $6 to $7 per ride.

The balancing act, says Klumpenhouwer, is providing an affordable service that is convenient enough to convince people to stop driving to work. While it’s cheaper to pick up more passengers along a route, “people are willing to detour from a straight-line service only so much,” he says.
‍

About 30 towns and cities in Canada, including Toronto, Winnipeg, Calgary and Edmonton, are experimenting with DRT, with more joining regularly, says Klumpenhouwer. One of the first was Belleville, Ont., in 2018.
‍

In theory, DRT solves the biggest drawback to fixed-route transit — having to conform to a preset schedule that often forces a rider to take lengthy trips, transfer and then walk to reach a desired destination. As an alternative, the sophisticated algorithms that underpin DRT enable personalization of route-planning.
‍

“It’s such a seductive idea,” Siemiatycki says. “This has been the lure, taking cars off the road.”
‍

Siemiatycki, Klumpenhouwer and Finley all say public transit needs to adapt if we are to hope to avoid endlessly escalating costs associated with traffic-congested roadways, aggravated by low-density suburbs.
‍

“What you’re trying to avoid is the mass congestion that comes with single-occupancy vehicles,” says Pacific Western’s Finley. “If we don’t start to do these things, we’re not going to be able to reduce the infrastructure spend.”
‍

But Klumpenhouwer says calculating the potential savings achieved through the use of transit can be elusive when it is virtually impossible to prove a correlation between increased use of mass transit and a reduction in vehicle accidents or a rise in population health.
‍

The value of DRT varies a great deal from city to city because of differences in community size and what the riders want to use transit for — i.e., commuting to work, shopping, entertainment or social gatherings. It is seen as particularly useful in both rural areas and low-density urban areas, Klumpenhouwer says, where providing frequent transit service on fixed routes is seen as a costly waste of taxpayer dollars. In those cases, DRT can provide service at rates comparable to fixed-route transit.
‍

The increasing use of DRT is gradually yielding data that may one day help inform better-designed transit systems, Klumpenhouwer says. For example, data show that in Cochrane, riders were not choosing to travel downtown but rather to visit friends or make a trip to the grocery store. When Belleville went to a purely on-demand service during the height of the pandemic, researchers were surprised to discover a main destination was Walmart.
‍

Findings like these have transit planners asking whether downtown-focused routes should be replaced with cross-town grid systems.
‍

For all its promises, DRT has some obvious drawbacks, Siemiatycki says. Creating a larger pool of riders per trip saves money, but it means some riders may have a long wait to reach their destination. “We all want a pool [of riders] — and we want the bus to come to our place first,” he said.
‍

Modern DRT also relies on the use of smartphones and data, which may not be readily accessible for those in most need of public transit — the poor, homeless, disabled and new immigrants still learning English. While the system offers some solutions, they’re not perfect. For people who do not own smartphones, transit companies often still provide the “dial-a-ride” telephone option, in which a person can ask a call centre to enter their trip request into the system. For rides who do not speak English, Via offers a live translation service.
‍

Klumpenhouwer says the design of North American cities, with their preponderance of low-density suburbs, will remain a roadblock to efficient transit in any form. “You can’t out-tech geometry,” he says.
‍

Another challenge is the so-called “dead-heading” phenomenon. Once riders are dropped at a destination, the bus is often empty on the return trip.
‍

Siemiatycki says that while DRT may have a role to play in public transit, it will never fully replace the fixed-route system, especially on heavily used routes. Desa predicts the emergence of a hybrid system, in which DRT service feeds major trunk lines. Finley says this so-called “first mile, last mile” concept has worked well in Calgary’s Livingstone/Carrington suburbs, but only as a supplement to fixed light rail transit.
‍

“There’s no question on-demand is not going to fully replace a full fixed-route system,” says Finley. But “it has its space and place".