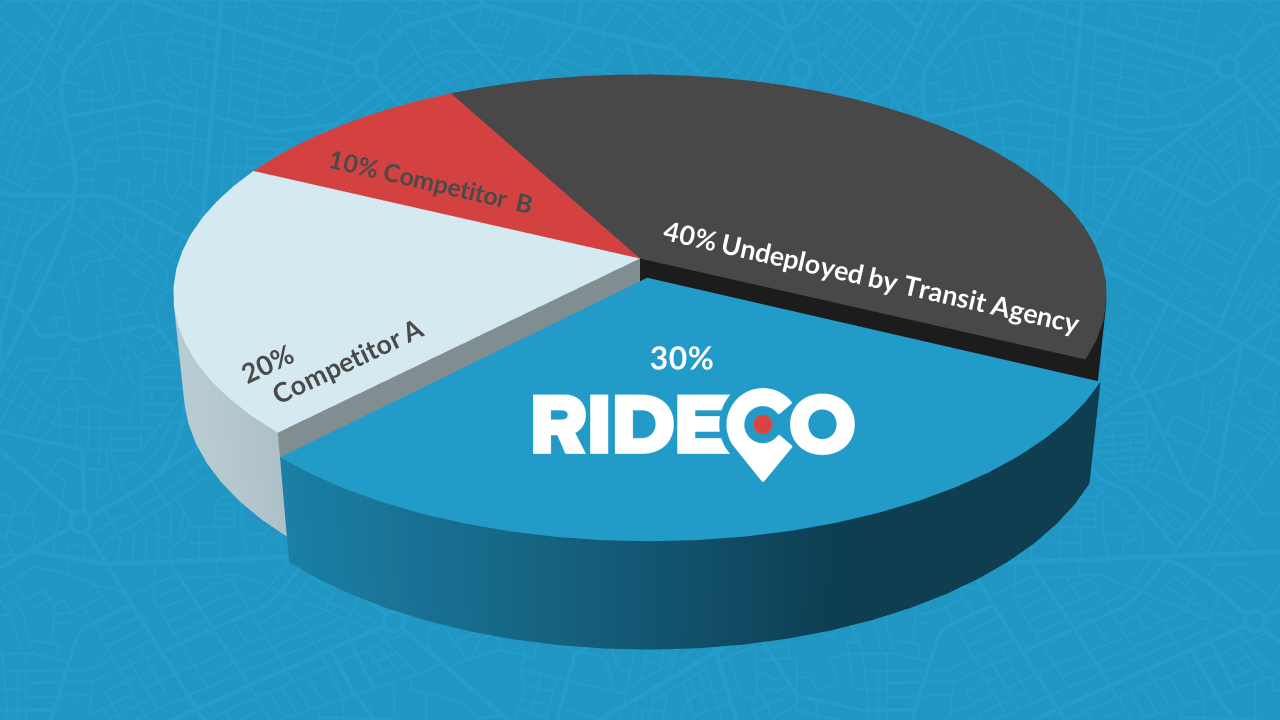 RideCo’s mission is to make transit more personal and sustainable. In 2015, RideCo launched North America’s first app based on-demand public transit service. Today, we are closer than ever to accomplishing that mission as the industry increasingly adopts our technology in cities across the United States.
‍

We are thrilled to announce that RideCo has a leading market share in the largest U.S. cities. Among the top 10 largest cities in the United States, 60% (6 cities) of their transit agencies have adopted app based on-demand public transit. RideCo has 50% market share in those cities, positioning RideCo as the market leader. Large transit agencies with complex use cases trust RideCo’s industry-leading product capabilities to solve their transit pain points. Our clients include Los Angeles, Houston, San Antonio, and Las Vegas. RideCo also powers the largest on-demand public transit program (involves 110 shuttles) in the United States.
‍

[RideCo’s on-demand transit] has proven to be a true game changer. The service has been tremendously successful as a flexible travel option that helps VIA become more efficient.

With over 15% of all transit agencies already adopting on-demand transit technology, and another 26% interested in exploring partnerships with providers, it’s no surprise that Frost and Sullivan have revealed predictions that global revenues for the shared mobility market are estimated to reach approximately $1 Trillion by 2025. On-demand transit provides many benefits for the agency and rider alike, including an improved passenger experience, increased ridership, lower cost per ride, adaptive operations, and more.
‍

With an increasing number of cities across the United States embracing RideCo’s value proposition of productivity, reliability, and partnership, the industry will see a transformative shift in static, fixed-route transit systems.
‍

We are thrilled, but not surprised, by the news that we hold leading market share in the industry among the largest U.S. cities. This truly speaks to the power and capabilities of our platform and the positive impact we are having on mobility in these communities.

As innovators in the market, we expect the industry itself to rapidly grow as an increasing number of agencies across the country recognize the value of on-demand transit. We plan to significantly grow our U.S. market share and continue to expand globally as we power the world’s next-generation transit systems.
‍