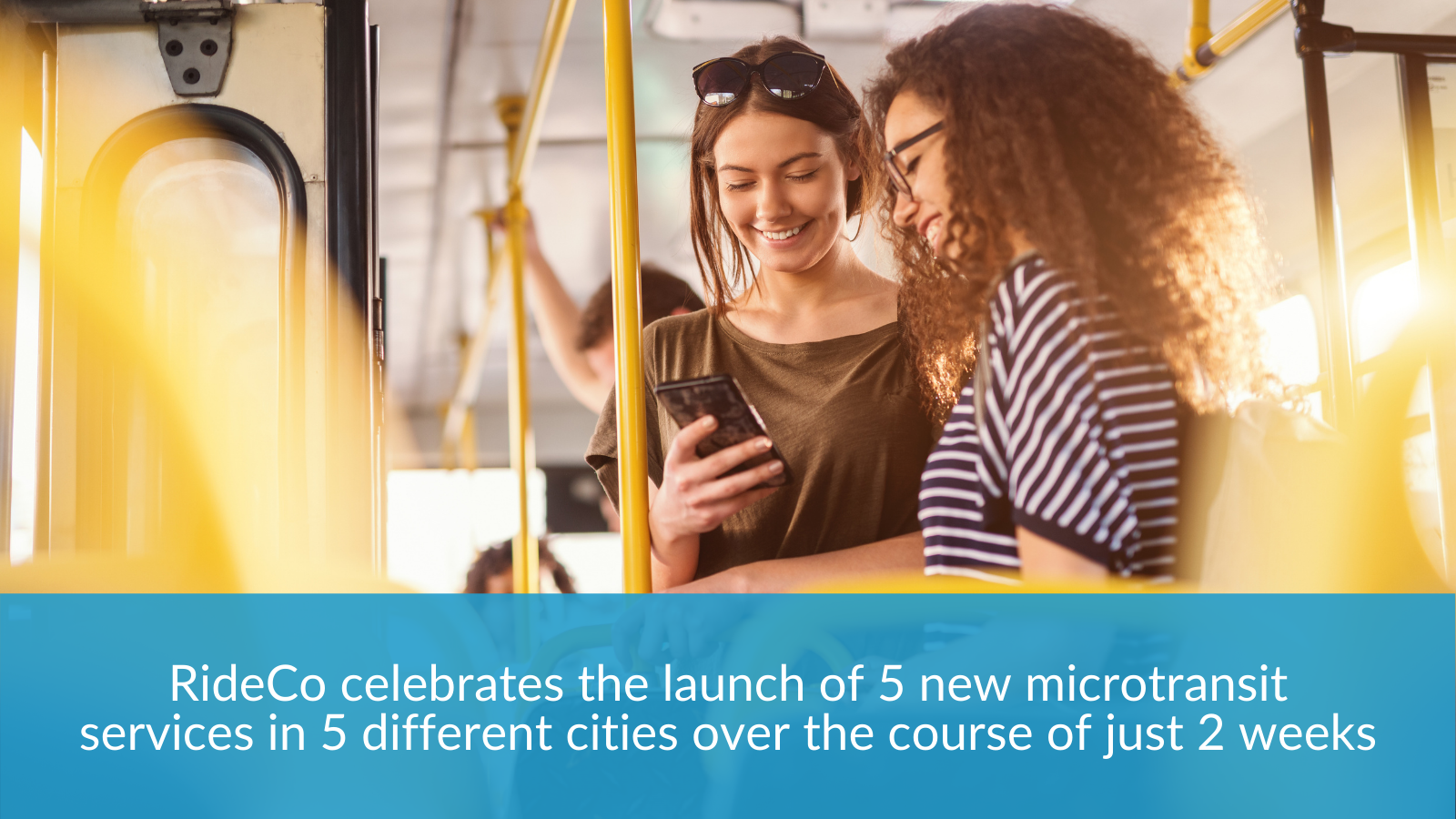 On April 19th, the town of Cobourg, Ontario launched a new on-demand transit solution, called ‘Cobourg Rides', which provides residents of the community and visitors alike with a cost-effective travel option to make Cobourg more accessible.

RideCo launched another on-demand bus service in Guelph, Ontario, on May 2nd to complement the conventional bus service. The innovative new addition to Guelph’s transit system will improve connectivity and convenience for riders, and it can be booked using the free ‘On-demand Your Way’ app, by phone, or on the website.

Just one day later, on May 3rd, RideCo also launched an on-demand transit service in Spruce Grove, Alberta, which riders can book via the ‘Pick Up’ app. Operated by Pacific Western Transit, the service improves efficiency for riders through direct trips with no unnecessary stops and it increases convenience by allowing riders to select their own pick up times and locations. Riders are also further connected to the city through more stop locations, longer service hours, and real-time tracking through the app.

RideCo also launched a new microtransit service in Inglewood, California on April 21st, called ‘Iride’, providing Los Angeles International Airport employees with a daily commute solution that is efficient, convenient, and easy to use. Employees are able to arrive at work faster while saving on gas and parking costs.

It’s very exciting for us to launch so many projects in such a short period of time. Our momentum is only increasing and we continue to look forward to driving the mobility revolution worldwide.

Contact us at rideco.com to find out how on-demand transit could help your agency as well.

About the Town of Cobourg

Nestled 59 miles east of Toronto, the Town of Cobourg, Ontario, is a popular tourist destination for residents from the Greater Toronto Area due to its numerous beaches and festivals, and beautiful parks. The town has also been recognized multiple times by MoneySense Magazine as “One of Canada’s Best Places to Live” in populations under 25,000.

About the City of Guelph

Guelph, Ontario is a growing, diverse, and vibrant community about 60 miles west of Toronto. The city’s community and business leaders are making a difference locally and globally in a variety of industries, such as agri-food, biotechnology, manufacturing and education. Guelph is known for its thriving arts and culture scene, pleasant neighbourhoods, and breathtaking parks and green spaces that help make Guelph among the most livable cities in Canada.

About the City of Spruce Grove

As the ninth largest city in Alberta, Spruce Grove sits just over 6 miles east of the provincial capital of Edmonton, attracting tourists to its many parks and walking trails. Spruce Grove residents enjoy the amenities of city living within a small-town atmosphere, and recognize the city as one in which to grow a business.

About the City of Inglewood

As a gateway to major commercial centers of the United States and internationally, Inglewood is in a unique position on the shore of the Pacific Rim. The Los Angeles International Airport is directly accessible by Inglewood’s Century Boulevard — one of the City’s busiest commercial corridors. The City’s proximity to the airport, the Los Angeles and Long Beach Harbors, and four major freeways facilitate both domestic and international trade.

About the City of Merced

Located in the heart of California’s agricultural Central Valley, Merced is an educational, cultural and business hub. The community is known for its abundant shopping, pleasant neighborhoods and youthful and diverse population. The city has been called the “Gateway to Yosemite” with Yosemite National Park less than 70 miles to the east, and the Pacific Ocean’s Monterey Bay just over 100 miles to the west.

RideCo is an industry leader in on-demand transit technology, enabling on-demand ridesharing for public transit riders around the globe. We partner with transit agencies, municipalities, and experienced local fleet operators to design and operate on-demand transit services. Our solutions reduce travel time, decrease walking distance, and increase service frequency for riders while lowering transit agencies’ cost-per-ride, reducing demand for parking, and attracting net new riders to transit systems. Visit our website to learn more about how our proprietary cloud-based platform can revolutionize mobility in your city.