3 Technologies Needed to Start Your Transition to a Smart City 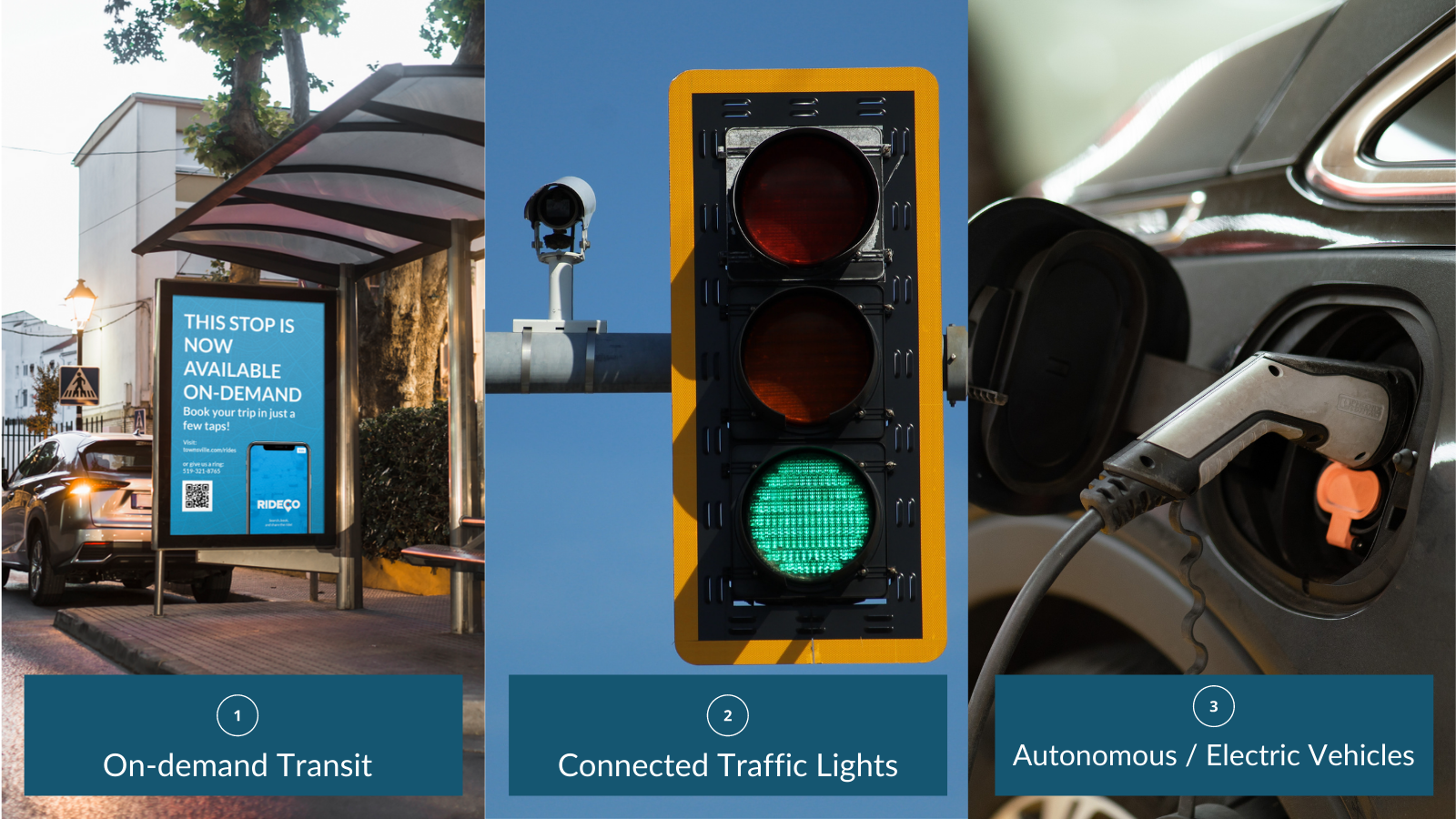 Cities around the world are facing growing environmental, societal, and economic challenges. Through making our cities smarter, we can make them better places to live by reducing city operating costs, cutting resource consumption, and improving mobility. In fact, smart city technologies are proven to advance key quality of life indicators by 10–30 percent.

But first — what even is a smart city? A smart city is a city that leverages the latest technologies and data analytics to increase its sustainability and efficiency through safety initiatives, economic development, waste disposal, improved transportation and mobility, and more!

A smart city is one that leverages technology to increase efficiencies and improve the quality of services and life for its residents.

On-demand transit is any autonomous, technology-enabled, shared public transportation service that is used to solve transit challenges. It is most frequently implemented for use cases such as low-density area mobility, first-last-mile gaps, underperforming bus routes, paratransit, and more.

This technology is essential in smart cities because:

This technology is already being implemented around the world to help transition regular cities into smart cities. Los Angeles Metro, for example, built the world’s largest on-demand transit system, with over 110 vehicles across 9 zones.

Metro is pushing the envelope in order to give people more affordable, flexible options to get around Los Angeles County without driving alone.

In a smart city, connected traffic lights utilize embedded cameras and sensors to change traffic flow as needed and in connection with each other. This ensures vehicles are not stopping every few hundred feet at an intersection, keeping traffic moving and reducing vehicle accidents.

Currently, without this technology, drivers in the U.S. experience a collective 17.25 million hours of delays per day at intersections around the country. With better coordinated traffic lights, travel speeds can increase by 10%.

Smart cities around the world have begun implementing connected traffic lights at an increasing rate. For example, in New York, city planners have taken the first step by installing traffic video cameras at intersections to improve travel times by 10%.

The World Bank estimates that there will be more than 1.2 billion cars on the road by 2030, meaning we need more efficient and environmentally-friendly ways of moving people around city centers. These self-driving electric vehicles will enable sustainable transportation and collection of data for enhanced decision making.

Autonomous and electric vehicles provide many benefits to smart cities, including:

A connected vehicle is also able to find open parking spaces, recommend the best routes, and allow drivers to surf the web or take conference calls while commuting. Benefits like these are why business information provider IHS Markit predicts that by 2040 our highways will be bumper to bumper with over 33 million self-driving vehicles.

The introduction of autonomous and electric vehicles is already well underway around the world. In Phoenix, Arizona, Google is already testing its self-driving taxi service, Waymo, while a self-driving grocery delivery service is being tested at Kroger in Scottsdale, Arizona. Self-driving vehicles can also be implemented in conjunction with on-demand transit to make the technologies even more efficient!

Some smart cities, including Amsterdam and Oslo, are pushing for zero-emissions transport within their cities by the year 2025 and 2030 respectively, through the adoption of electric, autonomous vehicles.

All three of these technologies are a step in the right direction for your city’s transition toward becoming a smart city, each with their own unique benefits. Contact us to take the first step in your transition to a smart city by implementing on-demand transit in your community.