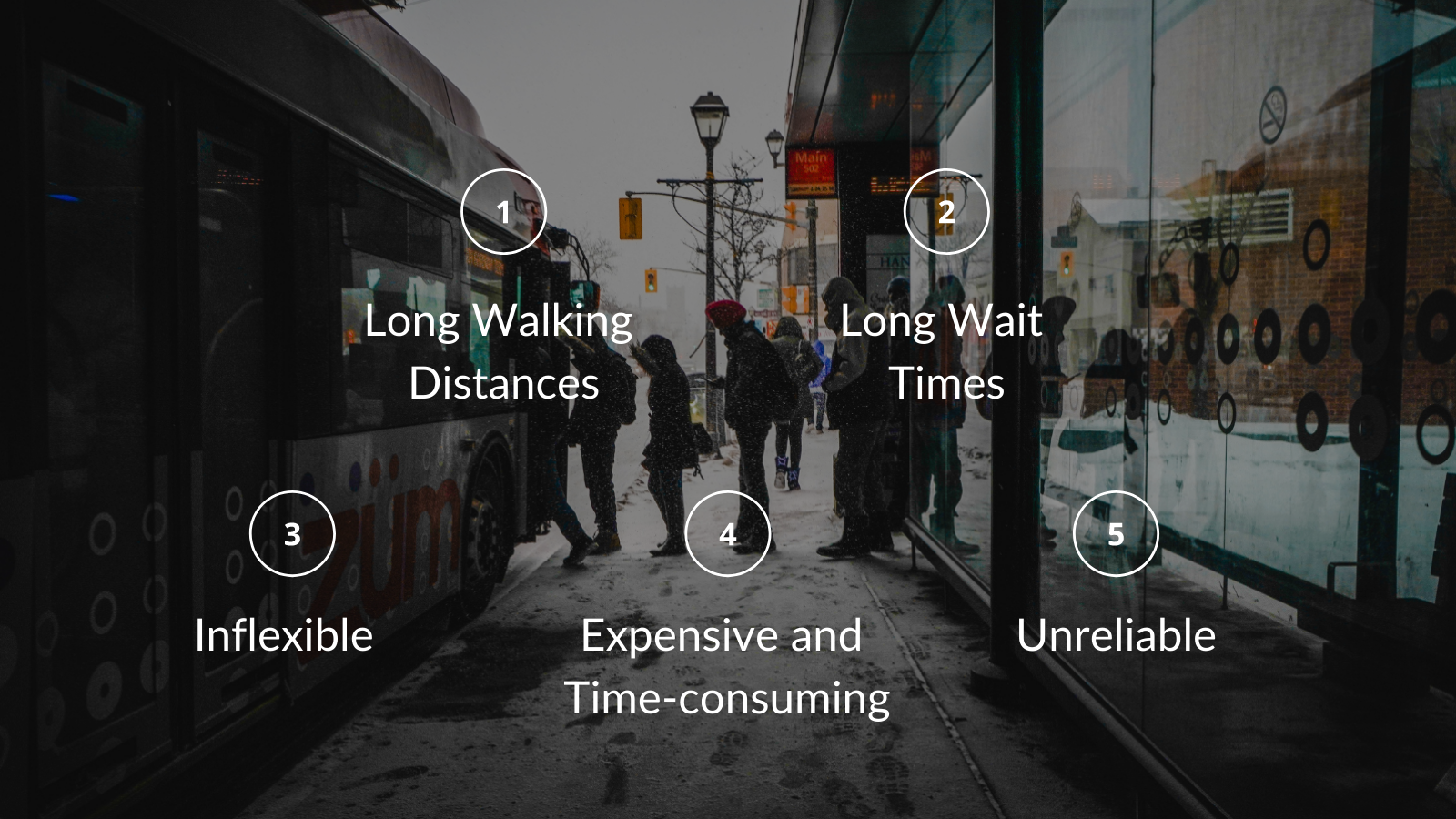 1. Stops are Too Far Away

In North America for example, passengers often have to walk upwards of one mile to access the nearest bus stop in low density areas!
‍

With on-demand transit, San Antonio’s public transit service achieves an increased level of coverage, moving stops closer to residents’ homes and shortening the required walking distance significantly. The service is also used as a first-last mile solution by some residents to connect to existing fixed routes that are too far to walk to.
‍

[RideCo’s on-demand transit] has proven to be a true game-changer… The service has been tremendously successful as a flexible travel option that helps us become more efficient and provides connections to the places our customers go.

2. Wait Times at Stops are Too Long

Even after walking long distances to fixed-route bus stops, residents then frequently have to wait long periods of time for the bus to even arrive, both in low-density and high-density areas. In Houston, Texas for example, residents frequently had expected wait times of up to 60 minutes for a bus to arrive at their stop.
‍

After the city implemented on-demand transit, however, Houston residents experienced an average 10-minute wait time for a shuttle to pick them up.
‍

On-demand transit is able to reduce wait times by:

Fixed-route buses and trains follow a defined route and schedule that cannot change based on rider needs. This means: the bus comes at a given time, regardless of when passengers need it, and drops them off at a fixed location, regardless of where their final destination is.
‍

With on-demand transit, riders can request a ride at the time they want one and be dropped off closer to their final destination. This can all be done via an app just minutes before they want to leave home, providing flexibility unmatched by fixed-route transit.
‍

It’s no wonder that residents in communities such as Carlsbad, California and Calgary, Alberta rate their on-demand service at an average of 4.9 / 5 stars!
‍

Additionally, depending on the flexibility of the transit agency, vehicle supply can be easily adjusted to match real-time passenger demand. This aligns rider satisfaction and the cost of the service for the agency.
‍

4. Fixed Routes can be Expensive and Time-Consuming

Since fixed-route transit costs a lot for agencies to run, some of that high cost gets passed onto the rider in the form of increased fares. With on-demand transit, however, agencies improve their farebox recovery ratios by increasing efficiency and ridership, therefore saving money. Sometimes, those savings are passed onto riders through a decrease in fare costs while maintaining the agency’s budget.
‍

When Houston METRO implemented on-demand transit, for instance, the agency saved over 20% in cost per passenger.
‍

Fixed routes are also extremely time consuming because riders have to go out of their way on the route or take multiple buses or trains in order to get to their final destination. With on-demand transit, riders go directly to their destination without any unnecessary stops in between; the technology-enabled scheduling ensures the most efficient route is taken each time.
‍

There’s a lot of savings when it comes to running the service less when it’s less busy. You can also run routes more efficiently because they’ll finish their travel much faster because they’re only going to the scheduled stops, rather than having to stop at each spot along the way.

5. Fixed Routes can be Unreliable

Many public transit riders have experienced the frustration of waiting for a bus to arrive long after its expected arrival time, or arriving a few minutes early and finding the bus has already left the stop. This results in riders often being late for important meetings and appointments.
‍

In fact, while 80% of transit agencies consider on-time reliability important to increasing customer convenience, only 20% of passengers are actually satisfied with the reliability of their agency’s service.
‍

With on-demand transit, however, riders have a guaranteed pickup window of 10 minutes and a guaranteed arrival time. This means riders can be confident in the reliability of the service and know that they will arrive at their destination on time.
‍

On-demand transit riders can even track their vehicle via an app before it arrives to ensure they are ready and at their virtual stop on time. This technology has enabled some demand-responsive services to achieve a record 98% on-time performance.
‍

If your city’s residents are experiencing some or all of the challenges listed above, it’s time for you to start considering solutions. Contact us to learn how on-demand transit can solve many common challenges facing both transit riders and transit agencies.